Over the course of a relatively long career, there are many examples of successful communications work of which I am very proud. It is impossible to list them all, so the following represents only a small selection of those actions and campaigns that helped make a difference.

Belgium: A treasure trove of content related to EU energy investments is available on the site we managed for 3 years (EU4Energy.eu). You can also get an overview of some of the campaigns and competitions organised under the EU4Energy banner - several of which were shortlisted by DG NEAR as a winning example of campaigning on their behalf. And check out the very wide range of video materials also produced.

And at ICF Mostra, I was involved in organising huge events in the heart of Brussels (Telling the Story), as well as developing cutting-edge interactive stands (Open Days) and producing promotional videos for EU agencies (EU Lisa) 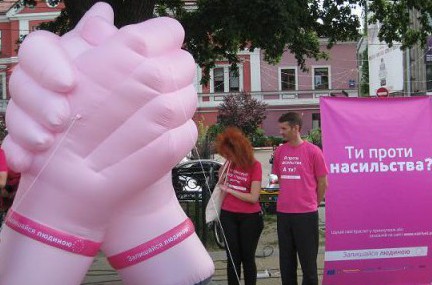 Ukraine: This flag-ship campaign tackled the wall of silence that surrounds domestic violence. Supporters joined the campaign by wearing a magenta-coloured bracelet and 750,000 were distributed across Ukraine in the summer of 2010 and 2011. The campaign rolled out across a range of media, featuring 15 press conferences, a radio and billboard advertising campaign, distribution of the bracelets by over 300 promoters and volunteers, an on-line campaign on the project web portal and social networks and promotion of the national hotline for victims. You can read a case study on the campaign, watch a TV interview at the 2010 launch, or watch a clip on the 2011 campaign.

Ukraine: A media highlight in 2011 - the "run in her shoes" event was organised within the 'Stop Violence' national campaign to raise awareness of domestic violence. Men were enticed to don a pair of high-heeled shoes and race to the finish line. A fun action with serious intent the main message was this - putting yourself in the shoes of a woman helps you empathise with their situation as the main victims in domestic violence situations. All the top channels were there - with the event making the prime-time evening news with a raft of feature pieces, articles and news stories.

Led by a well-known Ukrainian singing star, with even the organisers (!) getting involved and putting on some heels, this was a novel communications approach for Ukraine and its appeal to journalists showed that it worked well in highlighting this serious problem. Watch more here.

Turkey: Designed specifically for the Turkish market 'Lokum' (Turkish Delight) was a mascot for children, telling stories to younger audiences to help them get to know more about Europe. The mascot was used across a number of media - as a series of book books, an audiobook, and an interactive game. A spin off, travelling puppet theatre wowed smaller children at specialist events across Istanbul and Ankara.

And as a staple of communications campaigns at the time, I would mention some interesting titles we published: The accession process for Turkey, The facts about the EU, EU through the lens.